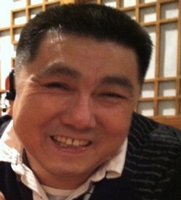 Keith Y. Shin was born on March 5, 1962 and passed away on December 17, 2020. Keith was the only son of Jae Bang Shin and Joung Nam (Choi) Shin. He was raised in Seoul, Korea and attended Seoul American High School. He had a good heart and was always kind to others. He was a son who was especially devoted to his mother. He was a father who supported his daughters from afar. He is survived by his daughters Tesia, Carnea, and Anika Shin; sisters Cindy, Jungae, Jungsook, Jungwon, and Youngeun. He was a very loving father and a friend to all who knew him and he will be missed dearly by all. May he rest in eternal peace, ending his worldly concerns, and in God’s kingdom of heaven, where he joins his beloved father, mother, and sister Nami.