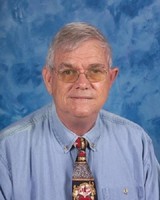 “Richard always placed his students first,” SAHS principal Richard Schlueter said in a DODEA news release. “Every one of them is a better person because of his caring and teaching.”