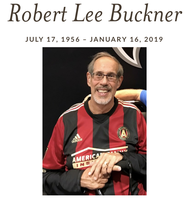 Robert Lee Buckner, 62 died January 16, 2019 at his home in Stone Mountain, Georgia after a long battle with restrictive cardiomyopathy amyloidosis. He is survived by his wife, Joanne Smith Buckner, his children Bradley Thomas Buckner, Michelle Elizabeth Buckner, & Kyle Robert Buckner, his grandchildren, Nicholas Burkett, Isabelle Burkett, and Cooper Buckner, his great grandson Carter Burkett, his mother Elizabeth Cooper Buckner, his brother and sister-in-law Julian A. Buckner and Wanda Simmons Buckner, his sister-in-law’s on his wife’s side, Suzanne Smith Mailman, and Teri Lynn Smith. He was predeceased by his father Julian Ellison Buckner, father-in-law Henry Charles Smith, & mother-in-law Maria Weidenkeller Smith. Robert was born on July 17, 1956 in Washington D.C. at Walter Reed Army Hospital to Julian Ellison Buckner and Elizabeth Cooper Buckner. He lived in many parts of the world including Korea while his father worked to secure the DMZ. During his high school years, he was goalie for the All-County Campbell high school soccer team, Cadet Captain of the ROTC drill team where Commander Buckner received the Order of World Wars medal, and Athlete of the month. Robert graduated in 1974 from Campbell High School, Smyrna, GA. While working at the Tucker Bonanza he met his wife of 37 years, Joanne. The two were married on May 25, 1981 with his three year old son Brad as the ring bearer. Brad told Joanne’s mother that he and daddy were marrying Joanne.

Robert later proudly became a mail carrier at the Tucker Post Office where he worked for 31 years. He always had a smile on his face for all his customers and when his body started to fail him and he had to retire he said what he was going to miss most were his customers. He made friends wherever he went and had a hard time going to anyplace in Tucker without having someone stop him to chat about either how happy they were he was their mail carrier, or when he was going to bid back onto their route.

Robert was a wonderful husband, a loving devoted father and grandfather. He loved jokes and had life-long friends that he still kept in touch with. He will be missed.