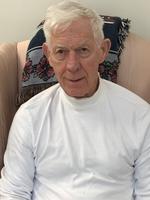 Crawford, Maine – Dr. Dean Chapman Wiles, 87, passed away Thursday, November 5, 2020 at his home with his beloved wife, Gayle by his side. Dean was born in Norway, Maine on December 21, 1932, son of the late Kenneth R. and Helen (Snodgrass) Wiles.

During his senior year of high school, Dean’s family moved to Farmington, where he graduated from Farmington High School, Class of 1951. Dean attended Farmington State Teacher’s College until joining the U.S. Army to serve during the time of the Korean War. He served with the 86th Infantry at Fort Riley, Kanas until his discharge in 1955. Following his service, Dean returned * home to Maine and completed his Bachelor of Arts from Farmington State Teacher’s College in 1957.

Dean taught school in Dixfield and Carthage until starting his career with the Department of Defense Dependents Schools in 1959. He taught school in Ansbach, Germany until returning home to earn his Master’s Degree from the University of Maine at Orono, Class of 1962. Dean returned to Germany where he was a teaching principal in Illesheim. 1964, he became the Principal of Bamberg American Elementary School, 1965 Principal of Bad Kissingen Elementary School, and 1966 Principal of Mainz, Elementary School Germany. In 1971, Dean completed his PhD in Philosophy of Education from Syracuse University in New York.

Dean’s career with the DoD Dependents Schools System allowed him to live and work in Europe and Asia. In 1971 he was given a Special Assignment Coordinator position in Butzbach, Germany. He then became the Butzbach Elementary School Principal in 1972. Dean moved to Okinawa, Japan in 1974 where he was the Elementary Coordinator. In 1976 Dean became Principal at Seoul American High School. Following that assignment, he worked as the Chief School Administrator for Principals of South Korea. Returning to Germany in 1979 he was the Education Branch Chief for Curriculum for schools located in the Germany North Region and in 1982 became the Chief of the Educational Division for DoDDS Germany. During his tenure, the DoDDS Schools in Germany North and Germany South were combined. Dean had oversight of 143 schools with 78,000 students. Dean retired in 1996.

Following his retirement, Dean accompanied his wife Gayle to her leadership assignments in Okinawa, Japan and Guam. While in Okinawa he was the DoDDS Home School liaison for the International Distance Education of Alaska. Dean was a life member and president of the education fraternity, Phi Delta Kappa, (PDK) in Germany. He was Kaplan of the Year in 1984. He was PDK Chapter Member Liaison for Pacific Region A 2002-2008. He was also a member of the Association for Supervision and Curriculum Development.

Dean was predeceased by his parents. Surviving are his loving wife, Gayle Vaughn-Wiles of Crawford; his children, all of Maine, Bruce Wiles of Newburgh, Scott Wiles (Mary Ann) of Eastport and Alison Wiles Hamlin (Tom) of Auburn; his grandchildren Tiffany Janvrin (Eugene) of Palmyra, Shannon and Allison Young, of Charlotte and Wells respectively and Emily Hamlin-Nickulas of Merrimac MA; and his great granddaughter Chloe Young also of Charlotte Maine.